There’s nothing like waking up to the sound of fighter jets breaking the sound barrier when you can’t remember where you are. After driving all night to arrive in Death Valley for the sunrise, we had set up camp and slept for five hours. Meanwhile, our yellow tent had become an Easy-Bake Oven in the desert high noon.

Turns out those UFO’s Philip and I were keeping an eye out for the night before probably would have been pilots from nearby Mojave military base. Or at least, that’s what they would have wanted us to think ;-P

We were lured out of our cave by the promise of cooler air outside. It didn’t get hotter than 90 degrees Fahrenheit during our trip, which is quite pleasant for Death Valley, but Philip and I both have icy Scandinavian blood running through our veins.

After slapping some sourdough PB & J’s together, dousing ourselves in sunscreen, and donning our hats, we felt fortified enough to begin exploring the park. You can’t go to Death Valley without stopping at the lowest point in North America: Badwater Basin. But we made a few stops along the way.

Our camp neighbor had suggested we stop at the Devil’s golf course. He told us that it didn’t look like much from the road, but once you got out to the fields of crystallized salt, it was the closest thing to another planet as he had ever seen. 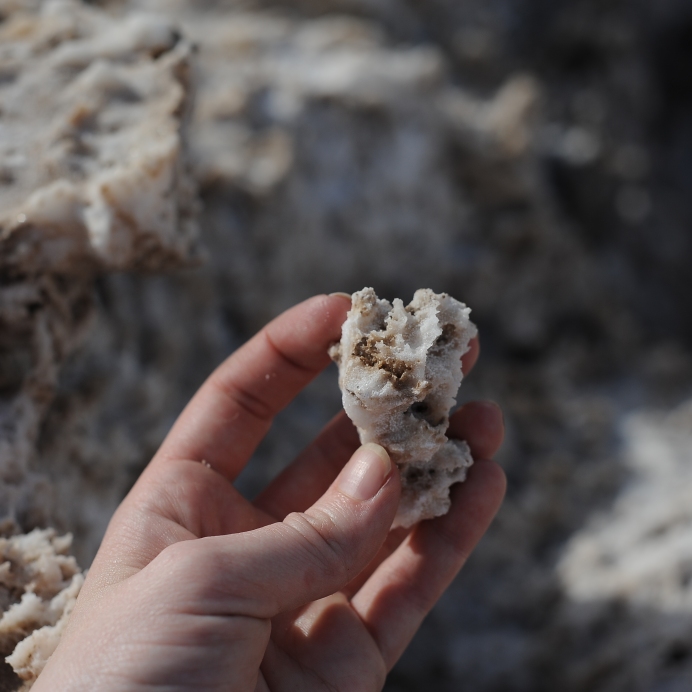 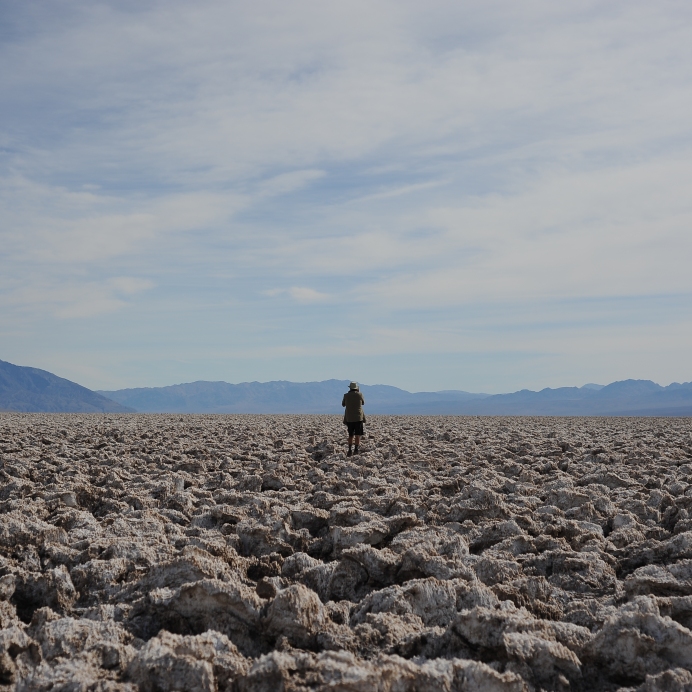 He was right, the turn would have been easy to overlook, but with his recommendation in mind, we decided to take the detour. Much like the lava fields of Iceland, “moon like” is the descriptor that comes to mind when looking out over these jagged landscapes.

The sign post warns explorers to climb the salt formations with care as any fall could result in broken bones. Emerging unscathed, we were off to Badwater.

282 feet below sea level becomes much more real when you look up a cliff face and see a tiny sign marking sea level. I have lived near the ocean for most of my life. Even when I studied in Switzerland for four years, I was still living at sea level in a valley surrounded by alps.

I had to chew gum as we drove through the park just to encourage my ears to pop with all the elevation changes we were making. Thankfully, my ears finally equalized by the time we arrived at the basin.

Badwater is another one of those names that gives Death Valley an edgy feel. Just as Death Valley is actually full of life, it turns out the water in the basin isn’t poisonous, just really salty. “Notgreatwater Basin” doesn’t have the same ring to it though.

After peering in the pools of murky water, we walked out as far as we could along the beaming white salt flats. Our goal was to make it further than the other tourists, although we were not willing to go as far as some other dedicated photographers on the horizon.

Once back in the car we decided to pull off onto Artist’s Drive. Before taking a loop through the park’s colorful mountains, we stopped at a view called the Artist’s Palette. This is where we snapped our dorky hat selfie. There were also some beautiful flowers growing in an around this area. 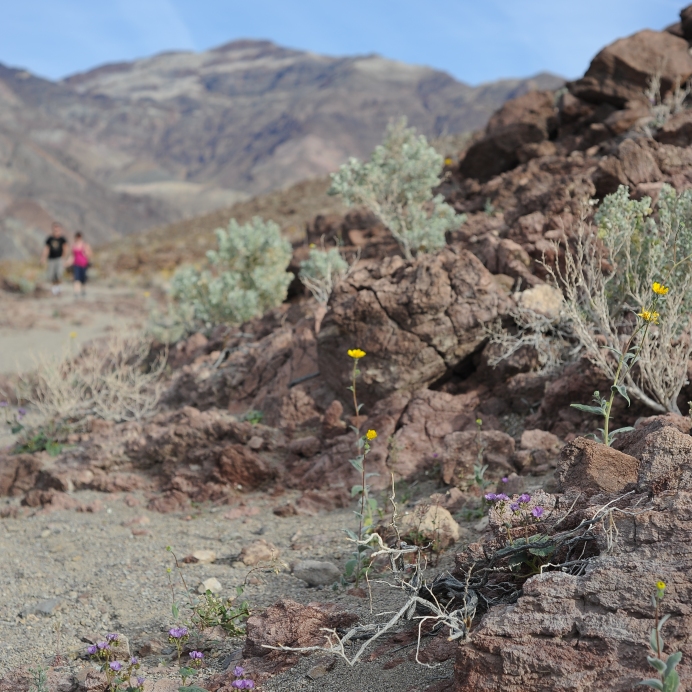 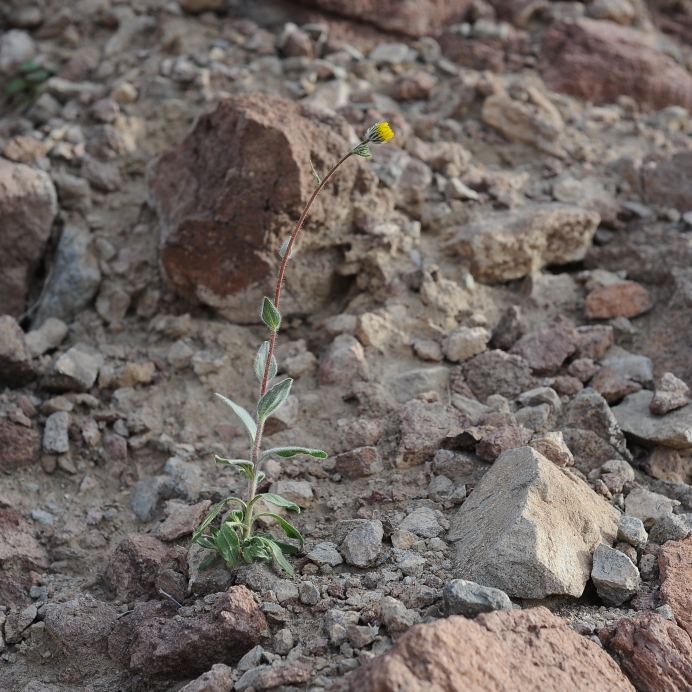 While touring Artist’s Drive I remembered Grizzly Bear’s music video for their song, “Knife.” I now realize it was filmed in Death Valley (possibly by Zabriskie Point?) and clearly inspired by the desert refineries of the 19th and 20th Centuries.

This song is from one of my favorite albums, Yellow House, and I was pleased to find that the rest of the songs perfectly suited the desert landscape. If you ever need a good desert road trip playlist, I recommend including songs by Grizzly Bear, Nick Drake and Jose Gonzalez. 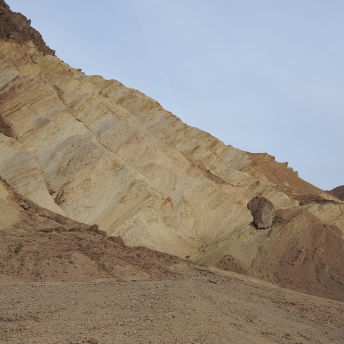 Death Valley is set up to accommodate tourists who want to stay in their cars. With the risk of heat stroke so high, this makes sense to me. Philip and I only wish we had come in a car with tires suited for off-roading or at the very least, one with a full-sized spare so we could get to more remote sights like the Racetrack and Eureka Dunes.

We were surprised by some bold compact cars speeding on unpaved roads. We took it nice and easy and kept an eye out for the numerous road signs warning about road conditions. Rangers warn that the highest number of park fatalities come from single car rollovers. 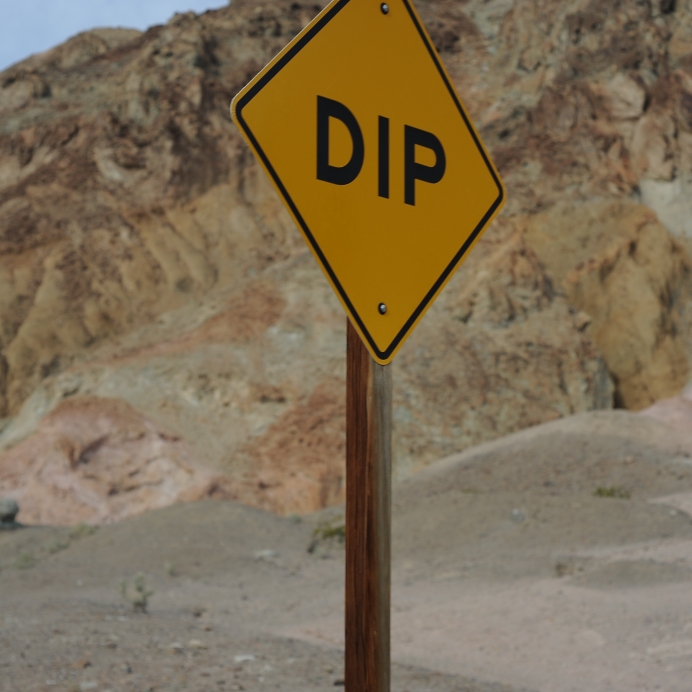 For sunset, we found a nice spot on the Mesquite Dunes. The sand on these dunes was unbelievably fine and soft. In Death Valley, you are especially aware that this sand is the result of millions of years of erosion. Alluvial fans of eroded rock spill off the surrounding mountains, continually filling up the valley even as it sinks with every tectonic shift. 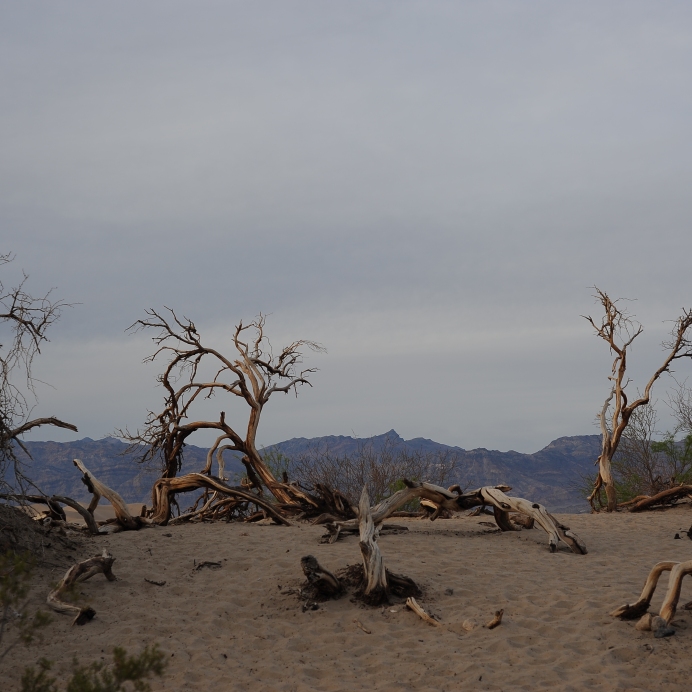 Even among the extremes of desert life, there’s a strong sense of equilibrium in Death Valley. Being able to see the effect of time on even the most indomitable landscape reminds you that nothing is permanent.

As we laid in the sand and watched clouds drift past, we made plans to get out of the car and experience more of the landscape on foot the next day.

To read more about our Death Valley adventures, stay tuned for more blog posts and read:

“No Sleep ‘Till Death Valley”